The Science case is now available on arXiv! Grab it from there; it consolidates and build upon our work on all the white papers exposed below.

The white paper process and its results are documented here.

The MAVIS science case is publicly available at the arXiv [McDermid et al 2020]; we encourage the reader to look at it for more details on the wide variety and scientific relevance of the proposed programs. 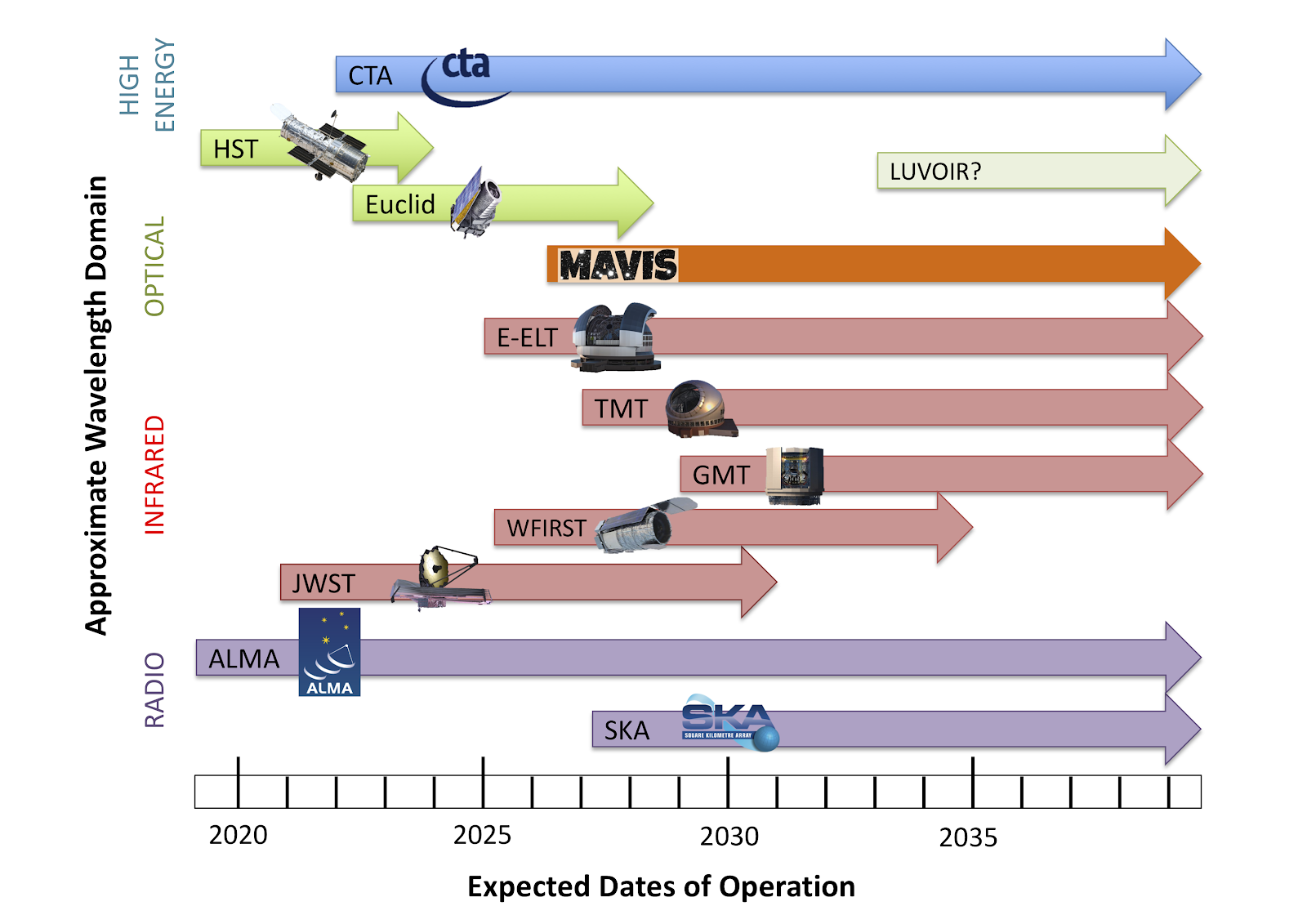 Fig 1: Overview of facilities operating on the timescale of MAVIS

By the second half of this decade, the need for a general purpose instrument able to provide optical imaging and spectroscopic capabilities at <100mas angular resolutions, with the light-gathering capability of an 8m-class telescope, will be urgent. JWST will be completing its 5-year design mission length, with potentially another 5 or more years ahead, having opened a new window on how stars and galaxies form in the first few hundred million years of the Universe, and revealed the formation process and atmospheric properties of planets around other stars. GAIA will have completed its precision astrometry census of the Milky Way, mapping the positions, distances and 3D motions of over a billion stars (as well as many millions of other sources) with unprecedented accuracy. ALMA will be into its second decade of discoveries, potentially upgraded for higher survey speed, and considering longer baselines for higher angular resolution (~10mas) studies. The Hubble Space Telescope, after opening the eyes of generations of scientists and the public alike to the beauty and complexity of the Universe when seen without the distortion of Earth’s atmosphere, will very likely be non-operational. However, collection of near-HST resolution optical-infrared imaging for a third of the extragalactic sky will be underway through the Euclid and WFIRST space-mission surveys, providing uniform high-resolution images to depths of ~25th magnitude. The E-ELT (and other new ELT facilities) will be seeing first light, making commonplace a regime of faintness and angular resolution at infrared wavelengths that has never been explored before.

A common theme among each of these exciting new developments is the ability to look deeper and sharper than ever before at the complex physical processes that underpin the observable Universe. A notably missing element, however, is a flexible, PI-driven facility instrument on a large-aperture telescope that will support, contribute to, and lead this new regime at optical wavelengths. MAVIS addresses this need, capitalising on the large investment of technology and experience in the VLT Adaptive Optics Facility to provide an efficient and stable platform for high-resolution optical astronomy into the next decade.

The principal innovation of MAVIS is to deliver a large, AO-corrected field of view with an image quality close to the diffraction limit of the VLT at optical wavelengths, across the vast majority of the sky. Working at such high angular resolution (~18mas) utilizing the large collecting area of the VLT will be groundbreaking for a broad range of exciting science. Importantly, the unprecedented sky coverage of MAVIS means that, for the first time, we can consider such a capability in the context of a general-purpose facility instrument. As such, MAVIS combines imaging and spectroscopic capabilities designed to address a broad range of science goals in a unique and competitive manner, while at the same time, providing stable, robust and efficient science operations.

Fig 2: Example of a morphological study of an high-z galaxy as observed with HST, ELT-MICADO, JWST-NIRCam and MAVIS in I band. Based on the z=5 high resolution simulated "Althaea" galaxy (Pallottini et al. 2017), shown in the first panel. The other panels show instead how the same target of 25 AB magnitude would appear in I-band if observed with different facilities for a fixed exposure time (1h). In the VLT/MAVIS image, clumpy regions as faint as 29th AB mag are detected with a signal-to-noise-ratio 5.

MAVIS will allow the deepest optical images ever obtained for point sources and compact galaxies. For example, MAVIS will detect sources 1 full magnitude deeper than the Hubble Ultra Deep Field (30.4mag vs 29.4mag around I band), but using 1/10th of the exposure time (10hr vs. ~100hr). At the same time, the spatial morphological information from MAVIS will exceed any existing facility at these wavelengths, including ELTs and JWST, allowing both the faint-end of the UV luminosity function at z>7 to be probed together with UV morphologies at this epoch.

On the other side of “cosmic noon”, MAVIS will combine spatial and spectral resolution to untangle the gravitational and feedback-driven motion of gas in the ISM of disk galaxies over the past 8 billion years. This is crucial to understanding the formation of Milky Way-like galaxies, and to physically connect the turbulent clumpy galaxies seen at early epochs with the relaxed and regular morphologies we see today.

In the local volume (<100Mpc), MAVIS will be transformative to our understanding of physical processes within galaxies - the so-called “sub-grid physics” that collectively represents the greatest obstacle to building a complete understanding of galaxy evolution. By the mid 2020s, simulations of galaxy formation will be reliably predicting <=100pc-scale phenomena in cosmological volumes. MAVIS will provide essential constraints on these scales within a similar local volume, crucially providing rich spectroscopic data sets with which accurate gas, dust, and stellar population diagnostics can be obtained on <10pc scales.

The exquisite sensitivity and angular resolution of MAVIS, coupled with the rich diagnostic power of optical colours, will revolutionise the study of stellar populations in galaxies beyond the local group by enabling precise photometry of individual stars at distances of up to 10Mpc, enlarging the volume available for such analysis by orders of magnitude. This will break new ground in understanding the stellar populations of galaxies with diverse formation and evolutionary paths, and provide access to unexplored regimes of low surface brightnesses inaccessible to integrated light spectroscopy. Importantly, the angular-scale and flux regime of MAVIS at optical wavelengths is very well matched to that of MICADO on the E-ELT, creating a powerful synergy of colour diagnostics from V through K bands, significantly improving the diagnostics possible with either facility alone.

Fig 3: Left: HST observations of a globular cluster in the Fornax dwarf spheroidal galaxy, compared with simulated observations of MAVIS V-band, with a zoom on the central regions (FoV~3" , corresponding to the MAVIS spectroscopic mode). Right: Small section of a MAVIS HR-Blue spectrum (blue line, R~15000), with several neutron-capture elements labelled. For comparison, the same spectrum as observed with MUSE (R~1900) is overplotted in green.

Spectroscopically, MAVIS will also probe new extragalactic environments for stellar populations. At large distances, only the most massive stars are bright enough for spectral metallicity and abundance studies, and these typically live in crowded star clusters which have not yet dispersed. MAVIS uniquely combines spatial and spectral capabilities to explore these regions, either on individual stars directly, or exploiting MAVIS-derived colour-magnitude selections for accurate stacking analyses.

MAVIS will play a significant role in bridging the observational gap in mass between black holes formed from individual stellar mergers (10–100 M☉ from recent gravitational wave detections) and the so-called “supermassive” black holes (106–109 M☉) thought to play a decisive role in the growth and evolution of galaxies, yet whose formation process is completely unknown.

At the upper end of this gap, MAVIS will observe statistical samples of low-mass galaxy nuclei with sufficient spatial and spectral resolution to confidently constrain the presence of 105–106 M☉ black holes using integrated light spectroscopy, and at the same time shed light on the evolution of the host systems (Stripped large galaxies? Or relic nuggets from the early Universe?).

At the lower end of the black hole mass gap, the innovative transmissive design of the MAVIS AO Module will allow precision multi-epoch astrometry in the densest regions of Milky Way globular clusters, which are too crowded for HST or GAIA astrometry, yet are the best hunting grounds for the elusive “intermediate-mass” black holes (103–104 M☉). MAVIS will allow tens of clusters to be probed on relevant scales, building a firm statistical basis for the presence, or not, of IMBHs, with either outcome having profound implications.

Fig 4: Simulation illustrating that even in the presence of a complex MCAO PSF, accurate proper motions can be derived at the precision, depth and radius required to detect the presence of an intermediate mass black hole at the centre of a Milky Way Globular Cluster, overcoming the typical confusion limit that hinders HST\cite{monty2020-1}

The dense central regions of globular clusters are also unexplored regimes for understanding the chemical and dynamical evolution of these once-called “simple stellar populations”, yet whose properties continue to defy explanation by current models of cluster formation, evolution or stellar nucleosynthesis. Tackling these issues cannot be done with imaging alone, nor by considering simple scaled-solar total metallicities, even if from individual star measurements. Understanding these evolved stellar systems requires a comprehensive abundance analysis across multiple nucleosynthetic channels, coupled with high-precision radial velocity information to understand the role and demographics of binary stars. This is exactly the capability that MAVIS will provide, giving a significantly higher spectral resolution and bluer wavelength coverage than any existing facility, opening access to precision elemental abundances in environments where they are most unknown.

MAVIS will also probe the immediate environments around individual stars, revealing the processes driving angular momentum loss that ultimately shapes star and planet formation, and probing the later stages of stellar evolution through mass-loss, re-formation of second-generation protoplanetary disks, and exploration of white dwarf binaries as the progenitors of Type Ia supernovae. In the circumstellar environment of our own star, the large sky coverage and flexible guide configurations of MAVIS will provide a new capability of on-demand and time-sensitive observations for minor bodies within (or passing through) the Solar System, as well as allowing regular monitoring of major bodies at 10s-100s km resolution.